When atoms share one or more electrons in their outer electron shells in order for each to complete its own shell, a covalent bond is formed between the atoms. The more electrons shared, the stronger the bond. The atoms of some elements always have a complete outer shell of electrons. These elements are said to be inert, meaning that they do not react with other elements to form compounds. Most covalent compounds are gases or liquids at room temperature. Oxygen, hydrogen, and nitrogen are examples of elements usually found in a covalent compound.

What can you infer from the information?

The most commonly found elements in nature are reactive.

It is common knowledge that oxygen, hydrogen, and nitrogen are among the most abundant elements in nature. These elements are usually found bonded with elements by covalence, which means that they have reacted with other elements to form covalent bonds.

Visit our website for other GED topics now!
Related questions
Charles’ Law: Given a constant pressure, the volume of a gas varies directly with the absolute temperature (measured on the Kelvin scale). Boyle’s Law: Given a constant absolute temperature, the volume of a gas varies inversely with changes in pressure.
What does Charles’ Law explain?
How is solar energy captured?
Which conclusion can best be drawn from the diagram?

What purpose do the two machines illustrated both serve?

Velocity equals what?
Which of the three types of faults can create a mountain range?

Mass times acceleration
In glycolysis, a molecule of glucose is broken down into all of the following EXCEPT
Humans normally maintain a constant internal body temperature of 98.6°F and are referred to as “warm-blooded.” Except in hot weather, reptiles are normally cold to the touch and are often referred to as “cold-blooded.” What does this mean?
Reptiles
A solar eclipse occurs when the moon blocks our view of the sun. Select the diagram that best represents the position of the sun, the Earth, and the moon during a solar eclipse, as well as the correct orbits.

Sound travels four times as fast through water as through air, about 1490 meters/second as compared to about 330 meters/second. Which of the following would be most useful in confirming either one or the other of these two speeds?
Water is a polar substance. It is called so because:
A hammer strikes the side of a tank every 5 seconds. If the hammer were to begin striking every 4 seconds instead, but with the same force, what would be the result? 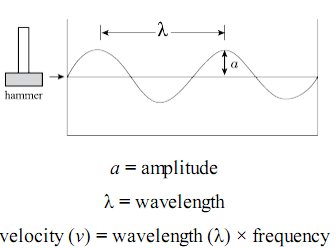 When you throw an object in either a northerly or southerly direction, when the object bounces off the Earth’s surface it will change path very slightly, rather than continuing in straight path. The direction of this path change will always be east. What is responsible for the path change described above?
Within the phylum chordata, the sub-phylum vertebrata includes mammals, birds, reptiles, amphibians, and fish. All vertebrates share in common four characteristics during the embryonic stage of their life cycle: • a hollow, dorsal (rear) nerve cord
• a notochord (backbone)
• gill slits (which develop into other structures in terrestrial vertebrates)
• a post-anal tail

Which part of the human anatomy shows that it belongs to the same sub-phylum as a lizard?

On a cold February morning, a blower system in a car warms up after several minutes and blows air through vents in the floor, dashboard, and windshield. Eventually, the driver is able to unbutton his coat and stay warm when the outside temperature is still \({23^0}F\)