In reproduction of yeast, a cell forms a “daughter” cell, and then the nucleus of the parent cell splits into a daughter nucleus, which migrates into the daughter cell. To which kingdom does yeast belong?

Since a yeast cell contains a nucleus, it is a eukaryotic organism. The formation of a daughter cell describes budding, and so yeast matches the description of one sort of fungi.

Visit our website for other GED topics now!
Related questions
Humidity is a measure of
Which of the following is NOT true about gravity?
Getting ready for a fall cruise inspires a young lady to spend a couple of weeks going to a local spa and reclining under a tanning lamp. However, such practices might result in dangerous overexposure to ultraviolet rays that can lead to cancer or premature aging
Which of the following does NOT cause changes in the Earth's surface, such as the formation of mountains and valleys?
Clay soil forms a fairly effective barrier against the movements of water. It also swells and shrinks significantly as its water content changes. Sandy soil, in contrast, allows water to move freely and does not change shape as the water content varies.

In which statement is the appropriate soil selected for its intended site?
An individual human has about 35,000 genes, each of which occupies a certain position on a molecule of DNA, called a chromosome, inside the nucleus of every cell. Genes direct the production of proteins that result in all the specific physical traits of the individual. During sexual reproduction, the parent’s chromosomes pair up and join to be passed on to the child, who inherits the DNA of both parents.

What theory best explains the wide variation in physical traits that you see among the thousands of people at a crowded festival or sporting event?

Which one of the following statements is an opinion, rather than a fact?
Which layer of the ocean contains the most life?
Cnidarians are aquatic animals with no eyes and with a body plan that exhibits radial symmetry around a single opening, or mouth. Some cnidarians permanently fix themselves by a flat base to an object, while others are bell-shaped and free-swimming. Like some cnidarians, echinoderms exhibit radial symmetry, but almost always in a five-pointed star configuration. Also, unlike cnidarians, echinoderms have a spiny outer skin.

Which pictured animal is a cnidarian? 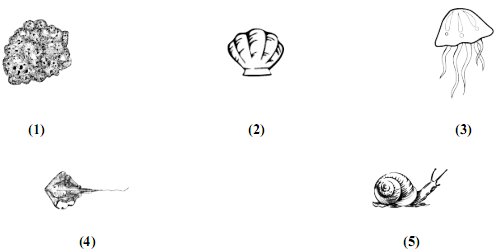 A woman is most likely to get pregnant if she has unprotected sex a few days before and on the day of ovulation, when the egg is released from the ovaries. The release of the egg is hormonally stimulated,meaning that a hormone in the woman’s body triggers ovulation. On average, women ovulate around the 14th day of their menstrual cycle. The following is a graph show- ing the levels of three hormones throughout the menstrual cycle of an average woman. 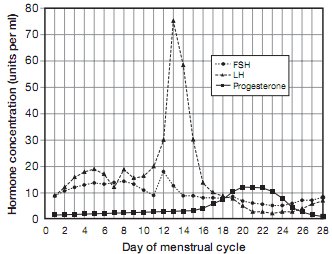 Based on the graph, which hormone is most directly responsible for triggering ovulation?
What does the sequence of illustrations show?

The biosphere encompasses all life-sustaining regions of the Earth, its atmosphere, and its oceans. The most significant changes occurring in the biosphere today include:
• The deforestation of wilderness areas through the clear-cutting of trees to make wood products
• The pollution of rivers and oceans due to fertilizer and sewage runoff
• The depletion of the protective ozone layer of the Earth’s atmosphere due to the overuse of certain air pollutants
• The desertification of grasslands due to livestock overgrazing, which reduces agricultural output and available habitats for native plant and animal species
Which is most clearly true of all four of the described changes in the biosphere?
Many species of small animals have learned to exploit all resources available around them to grow in population as quickly as possible. If environmental conditions change, these so-called “strategists” can quickly run out of resources needed to grow, or even sustain, their population. What is a good example of a strategist?
To maintain a stable internal state, or homeostasis, the body relies on receptors at or near the body’s surface to sense destabilizing conditions. These receptors send messages to the body’s integrator (the brain), which directs the appropriate effector to respond in a way that maintains homeostasis. Negative feedback occurs when the brain directs an effector to counteract, or negate, whatever is disrupting homeostasis. At times, however, the brain will provide positive feedback instead.

Which would be an example of positive feedback?
Earth’s magnetic North Pole is shifting at an accelerating rate from its earliest known position in northern Canada toward Russia. Scientists theorize that at the planet’s center is liquid magma rapidly circulating around an iron core and that the core and magma are constantly moving.
What can you infer from the information?

The illustrations show five types of tightly packed epithelial tissues, which form the thin membranes lining most internal and external surfaces of an animal’s body. Thinner tissues allow for the exchange of particles through the membrane, whereas thicker tissues serve largely as a barrier.
Which type of epithelial tissue lines a lung’s air sacs, which must freely pass oxygen to blood vessels in exchange for carbon dioxide?
Plants consist of various types of cells that serve different functions. For example, epidermal cells, which form a plant’s outer skin, often store food, while xylem cells, which are dead and hollow, transport water and nutrient salts to the other parts of the plant. Plant cells use structures called chloroplasts to make food for them by capturing the Sun’s energy.
Why don’t the epidermal cells that form the skin of an onion bulb contain chloroplasts?
Onion bulbs
It is a hostile environment of hydrochloric acid. Mucus is the first line of defense in protecting the lining, but when acidity increases it can erode the lining. If the acid breaks through the lining, the secretion of another protein is stimulated, which increases the production of hydrochloric acid, thereby establishing a destructive cycle. Until recently, a bland diet was recommended to prevent and reverse this disorder, but now physicians treat most forms of the disorder with antibiotics instead.
To what disorder is the information referring?
What are two main functions of electromagnetic radiation?
What is the driving force behind the movement of the plates?

Step 1: A virus particle attaches to a receptor site on the cell wall, from where it penetrates the cell wall.
Step 2: The virus particle sheds its protein shell and releases its genome into the cell.
Step 3: The viral genome creates new virus particles within the cell, causing the cell to swell in size.
Based on steps 1–3 of a viral infection, as shown above, what is likely to occur next?
What are the five layers of the Earth in order from outside to inside?
Through friction, energy of motion is converted to heat. You use this in your favor when you